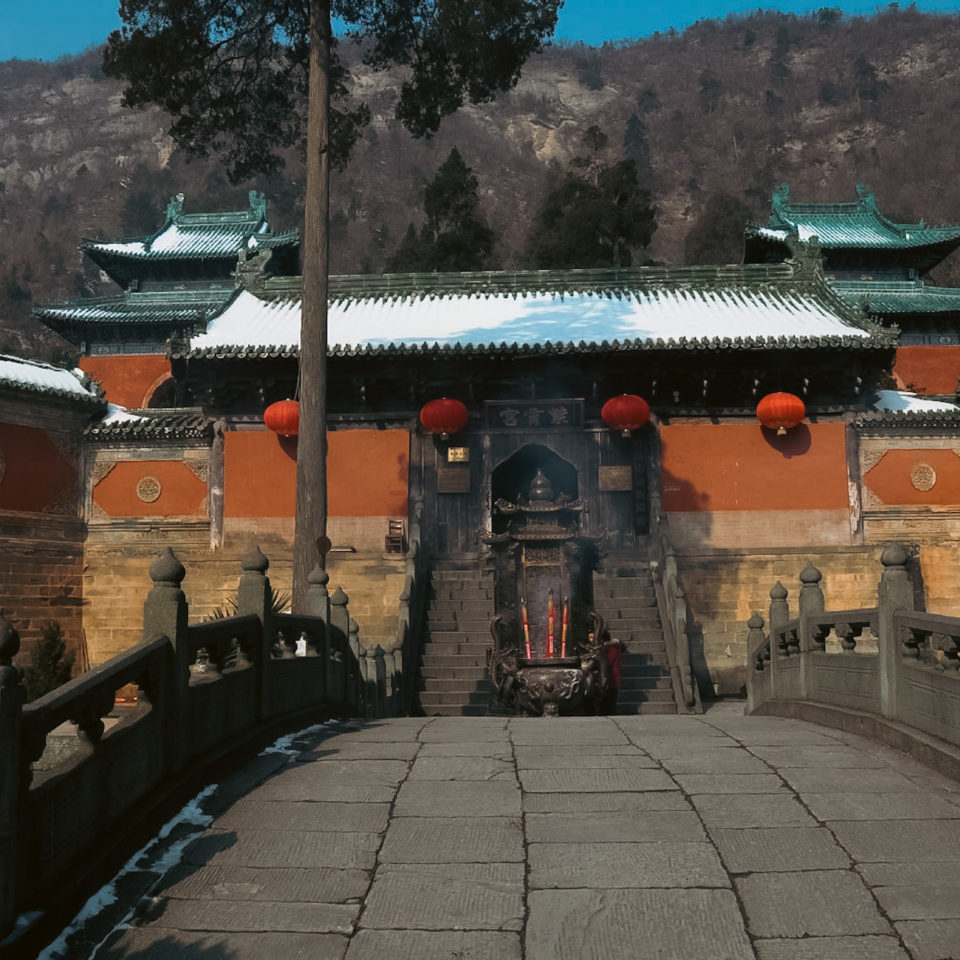 History of our Taiji Boxing

Tai Chi’s history is full of mysteries, incredible tales and features an array of fascinating characters. The earlier parts of its development are often debated by practitioners of different lineages and various academic scholars.

In this lineage we have an oral tradition of Tai Chi’s development beginning in Wudang/Wutang mountain. This is the story shared by multiple lineages, though they don’t all agree on exactly how this happened or the flow of events.

Most credit the famed Taoist practitioner, Chang San Feng, with the development and spread of the art, whilst he was on Wudang Mountain, practicing and developing various Taoist arts and pursuits. Some practitioners have also talked about the role of  Xu Xuanping in spreading the art. Xu was another of the colourful characters living on and around the mountain at a similar time to Chang San Feng.

Men such as Xu and Chang were wandering free sprits, living and roaming in the pursuit of ‘the Tao’. They would be living very simple lives, practicing breath work, meditation, internal alchemy and martial arts in pursuit of their cultivation. Xu was known for his poetry and shared a friendship with the legendary Chinese poet, Li Bai. Here’s one of Xu’s poems, which nicely demonstrates the simplicity of his lifestyle;

負薪朝出賣
沽酒日西歸
路人莫問歸何處
穿入白雲行翠微
At dawn I carry firewood to sell.
By dusk I have spent all my money on wine.
Passersby never ask where I am returning to.
I enter the white clouds to get to my verdant hillside.

For several generations the transmission of the art is difficult to trace, with different versions and stories told from the various practicing factions and scholars. One source, Song Yuanqiao, lists a transmission of the art in his book, which contains a whole array of fascinating differences for not only the name used in referring to the art, but also techniques contained within it.

Thirteen Dynamics, Innate Nature Boxing, Aquired Nature Boxing, Thirty Seven, Long Boxing are some of the names used by different teachers of the Taij Boxing approach over the generations.

Interestingly the solo training methods, for which Tai Chi has become famous, seems to have been trained quite differently with all of the techniques simply blended together in any order. From Song Yuanqiao’s book we have the advice;

‘These postures should each be trained one at a time until mastered before moving on to the next posture. Never be impatient for more. It does not matter which of the thirty-seven postures precedes or follows, only that they link together naturally, so that the postures all transform from one into another continuously. That is why it is called “Long Boxing”.’

A village clan, known as the Chen’s are said to have received the art from Chen Wan Ting, who learned his art from the monks (according to one version of events) at a Taoist temple, known as the 1000 Year temple. The Chen’s up to that point mainly practiced their own generic boxing/martial arts system, known as pao chui, which is linked to the Shaolin Temple in terms of its development.

Somehow an industrious and talented servant named Yang Lu Chan was able to get himself into a position where he was taught the full system of Tai Chi Chuan whilst working there. This was an unusual occurrence as these arts were often just taught to clansmen. Yang was largely responsible for the art undergoing some considerable changes as well as the explosion in the numbers of its practitioners.

Invincible Yang, his sons and his disciples

Yang Lu Chan was from Yongnian, in the Hebei province of China, though in the Qing period it was called Guangping. He was from a poor family but got the opportunity to move to, work and live in the Chen village for 10 years, during which time he studied and mastered Tai Chi Chuan. He subsequently moved onto teaching himself, first back in his home town and then in Beijing.

He became incredibly famous for his impeccable martial arts skills, taking on all challengers, without suffering any defeats. This got him the nickname ‘Invincible Yang’ and also got him appointed as the Chief martial arts teacher to the Imperial Bodyguards, the most elite soldiers of the day. He also trained members of the Royal household, including the princess and other assorted gentry. It’s likely that what hew passed onto the gentile Royals wasn’t quite the same system as that used by the elite military he also trained.

Yang had three sons, two of which lived also became famous as martial artists, and also found work teaching the soldiers and princes. Yang Ban Hou in particular was known as a special fighter, though due to him having a harsh and distasteful personality never became popular as a teacher.

Yang Lu Chan’s top non-family disciple was a soldier named Wu Quan You, who is the next link in the lineage of our system of Tai Chi Chuan. Wu Quan you trained his son, Wu Chien Chuan (also a professional soldier and martial arts tutor to the elite special forces) who in turn trained Cheng Wing Kwong, a businessman who fell in love with Tai chi and became a famous teacher in Hong Kong.

Cheng Tin Hung was born in Guangdong province. From 9 years of age he studied Tai Chi under his uncle, Cheng Wing Kwong, who was one of only three disciples of Wu Chien Chuan. Cheng Tin Hung also already had a background in Hung Gar, though studied Tai Chi intensively first under his uncle and then under Qi Min Xuan, a wandering martial artist who had been trained in Tai Chi from his father Qi Ke San, who in turn had been taught by Wu Quan You. It is from Qi that Cheng Tin Hung learned the fighting dimensions of the art, in addition to being advised to make the internal strength training a priority. Cheng Tin Hung is reputed to have spent around 3 hours a day on internal strength training alone.

A formative experience that Cheng experienced as a youth was observing a streetfight between a well known martial artist and a local street tough/criminal type, who was essentially unschooled in martial arts. Despite the well known martial artist being in good physical condition he had a lot of trouble with the ruffian and the fight was a long drawn out event, with neither side securing a real victory. It was explained to Cheng Tin Hung by someone that despite being trained in elements of martial arts, the practitioner had very little real fighting experience. Without real experience it is essentially impossible to actually understand how to use the techniques and strategies of martial arts. This experience had a profound effect on Cheng Tin Hung, and essentially shaped his approach to his own training and that of his future students, to ensure that this wasn’t to be the case for those who trained in his school.

In 1957 Cheng Tin Hung was recruited to for for Hong Kong, along with 9 other top Hong Kong kung Fu fighters, against the elite Taiwanese fighters of the day in full contact platform matches. The Taiwanese were essentially professional fighters and were all military men with a lot of experience, in comparison to the Hong Kong team. Cheng Tin Hung used his Tai Chi to knockout the 3 time national champion of Taiwan, You Man Tong, who was also the head martial arts coach for the entire Taiwanese military. His Tai Chi classmate (who trained under Cheng Wing Kwong) Woo Shing, also put on an excellent performance against a far heavier performance. All the other Hong Kong fighters were demolished by the professional Taiwanese fighters.

Cheng Tin Hung from that moment on was regarded as the top fighting Tai Chi man of his day, and become renowned as an excellent teacher and trainer for all those wanting to learn and practice Tai Chi as a full fighting art. He acquired an impeccable record as a trainer, training multiple international full contact  fighting stars. Domestically on the Hong Kong circuit at one point his team had a record of 31 victories out of 32 fights i fights, fought on raised platforms with no ropes.

He was also well known as a defender of other tai chi practitioners and never associated with the triad clans, who often sought out relationships with martial arts schools. One story is that he was once ambushed by around 10 gang members who attacked him with machetes. He survived and hospitalised the majority of his attackers. He always emphasised using Tai Chi for practical self defence only.

In the 1970’s a couple of intrepid Scotsmen trained with Cheng Tin Hung whilst they were working in hong Kong. Ian Cameron and Dan Docherty both spent time there in the 70’s learning as much as they could about the art, under Cheng Tin Hung’s tutelage. Dan competed in both domestic and international full contact competitions during his time, winning the open weight category of the south Asian Martial arts full contact contest. Both have done a lot to spread the teachings of the art since returning to the UK. Europe now has a large number of practitioners, primarily training in Dan Docherty’s method.

The current generation of practitioners of this style

Cheng Tin Hung, in his prime taught Tai Chi to serious martial artists in an uncompromising way. It was reputed to be the toughest martial arts school in Hong Kong. The more serious students regularly participated in full contact sparring matches with each other, underwent extremely intensive conditioning programs and generally took things to their fullest potential. For others who didn’t share fighting ambitions, or becoming serious practical martial artists things were taught far more gently, with more emphasis on forms, push hands exercises etc.

The current generation of practitioners in general train the art in a balanced way, with some groups emphasising the harder fighting elements whilst the majority practice what has been termed ‘Wudang light’. This slightly lighter version of the art is more palatable for most people who have full time jobs and can’t commit the time, energy and so on to practicing the art at its most intensive levels.

The approach we take is to offer an optimised training process, as much as is possible, which allows people to take their training level to whichever heights they wish to reach martially, physically or meditatively.